THE MARRIAGE FEAST IN CANA OF GALILEE (2)

A.    In our first lesson this morning, we found Jesus attending a marriage feast in Cana of Galilee (John 2:1-11)

1.      When the host ran short on wine, Mary approached her Son about the matter.

C.     In this lesson, we want to complete our study of this unique event in the life of Christ.

And there were set there six waterpots of stone, after the matter of the purifying of the Jews, containing two or three firkins apiece.

b.      They would have been fairly heavy much like our stoneware today. 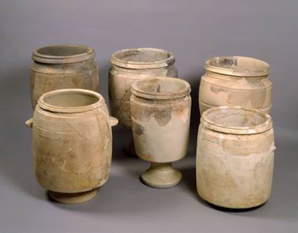 b.      However, if needed, they would have been filled with water so the guests could wash their hands before eating (See Matt. 15:2, Mark 7:3)

c.       The pots could also be used to wash the dishes or to wash the tables used to serve guests food.

b.      The estimate of one firkin has been about 8 gallons.

Jesus saith unto them, Fill the waterpots with water…

1.      It is interesting that the only thing Jesus did was issue an order to fill the pots with water.

And they filled them up to the brim.

And he saith unto them, Draw out now, and bear unto the governor of the feast.  And they bare it.

1.      Remember, the only thing that went into the pots was water.

2)      Thayer:  superintendent of the dining room, the table master

b.      This individual would be responsible for at least two things:

1)      Inspecting the quality of the food being served

3.      We are told that the servants fulfilled the charge that Jesus gave to them.  “And they bare it.”

When the ruler of the feast had tasted the water that was made wine, and knew not whence it was, (but the servants which drew the water knew,)…

A.    We now learn that the water was made wine.

1.      One element was made into a completely different element with no process involved to make the change.

2.      Water is involved in making wine.  The vine must be watered and the grape is composed of part water.

3.      In this miracle, Jesus overrode the process and the time needed to produce the wine.

a.      The laws of nature were completely disregarded.  This is one of the aspects of a miracle, the overriding of natural laws.

B.      Men love to boast of being miracle workers today.

1.      However, their supposed miracles do not begin to compare to the miracles of Jesus Christ.

a.      Not one man has ever turned water into wine just by pouring water into water pots.

b.      Magicians might be able to make it appear they have done the same thing as Jesus, but there is always a trick performed in their magic.

2.      If miracle workers of the 21st Century want to boast of performing miracles let them do the miracles of Jesus.

b.      Turning loaves and fishes into a meal for thousands

c.       Raising the dead after he has been dead for four days

C.     NOTE:  This needs to be the focus of the miracle Jesus performed that day.  The main discussion of this miracle should NOT be whether the wine was intoxicating or not.  Man’s lust for evil things has taken the focus off the miraculous power of Jesus that proved He is the Son of God (See John 20:30-31).

And many other signs truly did Jesus in the presence of his disciples, which are not written in this book:  but these are written, that ye might believe that Jesus is the Christ, the Son of God; and that believing ye might have life through his name.

…the governor of the feast called the bridegroom, and saith unto him, Every man at the beginning doth set forth good wine; and when men have well drunk, then that which is worse:  but thou hast kept the good wine until now.

A.    Now comes the “primary” discussion that most have regarding this miracle.  The question is:  “Did Jesus turn the water into alcoholic wine?”

B.      There are three considerations that must be brought up in this discussion.

a.      Some believe that because the word “oinos” is translated “wine” that is must mean intoxicating wine.

b.      Not so!  There are times when the word “oinos” is used in the Biblical text and word cannot mean intoxicating drink.  It must refer to the pure juice of the grape (See Luke 5:37a).

And no man putteth new wine into old bottles…

1)      New wine is grape juice that has been freshly squeezed from the grape.

2)      It is put into new wineskins in order to ferment.  If it were not, it would burst the old wineskins as it fermented.

a.      First, the governor’s words refer only to the taste of the wine, not to the alcoholic content.

b.      A person would usually put out the best tasting wine first.  After that, he would set out the inferior tasting wine.

c.       This is not what happened at the marriage feast in Cana of Galilee.  The wine that Jesus had made was far superior in taste to the wine that had been previously set out.

a.      Would Jesus, the holy Son of God, turn water into alcoholic wine?

1)      There are many who answer in the affirmative.  Why?  Because they want to justify drinking intoxicating wine today.

a)      First, because Jesus would not violate the teachings of the Law.

Look not thou upon the wine when it is red, when it giveth his colour in the cup, when it moveth itself aright.  At the last it biteth like a serpent, and stingeth like an adder.

Woe unto him that giveth his neighbour drink, that puttest thy bottle to him, and makest him drunken also, that thou mayest look on their nakedness!

b)      Second, Jesus is holy and would never give something to anyone that might bring them to heartache, ruin, and destruction.  He would not give them something that might enslave them to Satan.

This beginning of miracles did Jesus in Cana of Galilee and manifested forth his glory; and his disciples believed on him.

A.    By performing this miracle, Jesus manifested His glory.

B.      Thayer defines the word “glory” as “magnificence, excellence, preeminence.”

C.     Those who witnessed this miracle would realize that there is something “powerful” about Jesus.

1.      The miracle would prove that He is more than an ordinary man.

2.      This miracle would point out that there is something special about Jesus.

3.      This miracle would cause those who saw it to listen and heed the words which He spoke.

D.    It had a profound impact on His disciples, “and his disciples believed on him.”

3.      The miracle, however, confirmed to them that this truly was the Messiah.

E.      This was the first miracle Jesus performed, but it would not be the last by far.

A.    John only highlights eight miracles of Jesus in his gospel account.

1.      He believed that these miracles, if considered honestly, would convince an individual that Jesus Christ is the Son of God.

2.      The first of those he wrote about was turning water into wine at the marriage feast in Cana of Galilee.

B.      Let’s not get lost in the “wine” controversy promoted by the social drinkers among us.