THINGS CHRISTIANS MUST STAND AGAINST (2)

Thou therefore endure hardness, as a good soldier of Jesus Christ.

Put on the whole armour of God, that ye may be able to stand against the wiles of the devil.

C.     Others have stood against evil.

D.    There are many evils against which we as Christians must stand today.

a.      Disrespect of Authority

2.      In this lesson, we want to look at two more things against which we must stand.

a.      Those who have abortions usually have the mindset that they are ceasing a pregnancy.

b.      They do not like to think about the fact that they are stopping a life.

b.      Dictionary.com:  To bring forth a fetus from the uterus before the fetus is viable

c.       What if the definition was:  “to kill an unborn child in the womb of the mother by one of several different processes:  medication, saline solution, suction, knife, or forceps”

b.      Not financially able to care for a child

4.      Do not want others to know about sexual practices

5.      Others encourage the individual to have an abortion:  significant other, family

C.     Why we MUST stand against abortion?

2)      The egg of a female must come into contact with the fertilizer of the male.

3)      When they unite, there is conception.  What is it that begins to form within the womb?

a)      It is called by three names scientifically:  zygote, embryo, and fetus.

5)      The only difference between the child at conception and the child at birth is nine months of growth in the mother’s womb.

6)      A woman will not usually know she is pregnant until she is six or seven weeks into the pregnancy.  Here is a picture of the child at seven weeks of age.  (NOTE:  By this time, there is usually a heartbeat that can be detected). 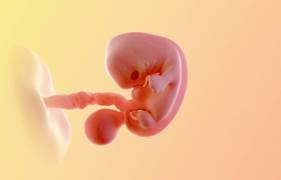 b.      God’s word reveals that a baby is a baby whether in the womb or out of the womb.

And this shall be a sign unto you; Ye shall find the babe wrapped in swaddling clothes, lying in a manger.

And it came to pass, that, when Elisabeth heard the salutation of Mary, the babe leaped in her womb; and Elisabeth was filled with the Holy Ghost.

Thou shalt not kill.

…of the which I tell you before, as I have also told you in time past, that they which do such things shall not inherit the kingdom of God.

2.      It opens the door for the destruction of more human life.

1)      Babies to whom mothers have given birth

2)      Elderly people who are not considered profitable to society

4)      People considered inferior due to their race

5)      Individuals who refuse to support a certain political viewpoint

But evil men and seducers shall wax worse and worse, deceiving and being deceived.

A.    The LGBTQ agenda dates back to November, 1987.  An article was written in Guide, a magazine for homosexuals, entitled:  “The Overhauling of Straight America,” by Marshall Kirk and Hunter Madsen.  In that article, they laid out a blueprint to change the attitudes the American public has toward homosexuals and homosexuality.

2.      The LGBTQ began with desensitization, then moved to acceptance.  From there, they sought to proselytize others, especially our children, into their movement.

3.      In the article, six steps were laid out to accomplish their agenda:

a)      Talk about gays and gayness as loudly and as often as possible.

b)      Portray gays as “victims,” not aggressive challengers.

B.      They have been very successful in achieving their agenda.

1.      Most of us know one or more associated with the LGTBQ community.  It may be someone from our family.

2.      The media presents the LGBTQ community in a positive light.  They also present those who oppose those lifestyles as intolerant, unloving, haters, and evil.

4.      Children’s books have been written that approve of the gay lifestyle:  Mommy, Moma, and Me, Daddy, Papa, and Me, Keesha and Her Two Moms Go Swimming, and The Different Dragon.

a.      Gay movies:  Portrait of A Lady on Fire, Moonlight, A Fantastic Woman (transgender)

b.      Children movies: Disney’s “Onward” has a character, Officer Specter who is gay, and Valkyrie in the movie, Thor:  Love and Thunder, is bi-sexual.

6.      On many TV programs, especially the talent programs, gays tell their stories of fear, ridicule, and rejection.

C.     Christians must stand against the lifestyles of the LGBTQ community because of the plain teachings of God’s Word.

1.      God showed His contempt for these lifestyles when He destroyed the cities of Sodom and Gomorrah in Genesis 18 & 19.

a.      Some say that the reason God believed they were evil is because they aggressively forced themselves on others.

But the men of Sodom were wicked and sinners before God exceedingly.

For this cause God gave them up unto vile affections:  for even the women did change the natural use in that which is against nature:  and likewise the men, leaving the natural use of the woman, burned in their lust one toward another; men with men working that which is unseemly, and receiving in themselves that recompense of their error which was meet.

4.      NOTE:  We should never hate the people who are caught up in these sins.  However, we can never approve of the sin in which they are engaged.

A.    In this lesson, we have looked at two huge moral issues:  abortion and homosexuality.

B.      Both of these practices violate the clear teachings of God’s Word.

C.     They are spiritual issues, but they have been cast into the realm of politics.

2.      What they fail to understand is that it is the State that has tried to highjack these issues away from religion.

3.      Christians will not let this happen.  They will not allow the State to determine what is sin and what is not sin.  God’s Word makes those determinations.

D.    Christians have been told to stand against all sin (Eph. 5:11).  Since abortion and the LGBTQ practices are sinful, we will oppose them with every fiber of our being.